This is a room of mosaics made entirely out of 11.5 million of cigar bands from 265 different brands! 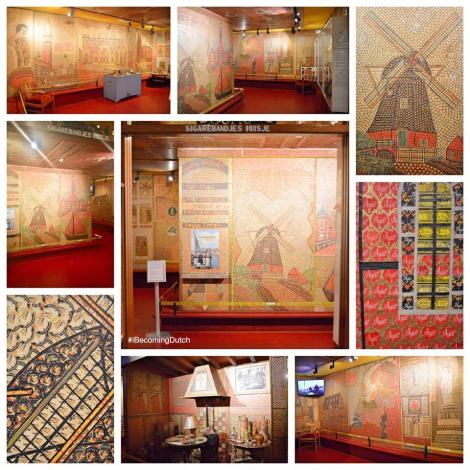 The idea began in 1947 in the attic of a Volendammer, Nico Molenaar. He started collecting and assembling cut-out medallions of cigar bands into designs. His artworks were glued on to panels/boards, which he then applied to the walls in his house located at Dril, in Volendam.
His creations include St. Peter’s Basilica in Rome, Statue of Liberty in New York, Manneken-Pis in Brussels, Cathedral in Cologne, Leaning Tower of Pisa in Italy, Martini Tower in Groningen, Coats of arms of provinces of the Netherlands, windmills and other typical Dutch symbols.

After his death in 1964, his collection of artworks was estimated with no less than 7 million cigar bands. The project was taken over by his neighbor Jan Cas Sombroek, who continued the artworks further with another 4.5 million cigar bands till 1991.

The Volendams Museum bought the collection in December 1993 for the price of 60.000 guilders. On 5 May 1995, the Cigar Band House was opened and showcased as a room, a permanent exhibition part of the Volendams Museum. The mosaic of artworks covers the entire walls, ceiling, tables and other household items.