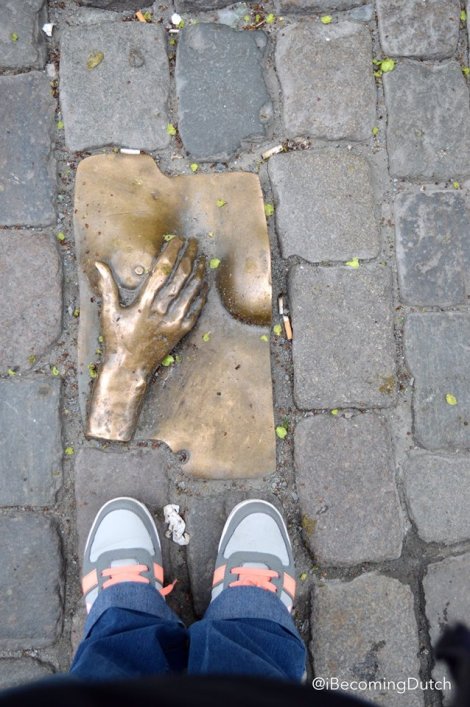 A sculpture of a hand caressing a female breast in bronze plate found among the cobblestone pathway near the entrance of Oudekerk (translation: Old Church) in Amsterdam.

Story has it …
The sculpture was placed anonymously late one night. Within a week, the bronze plate was removed by the local government because it was at an inappropriate place, causing noise pollution (when the bronze was struck/stepped on) and placed without Amsterdam city’s permission.
The anonymous artist came forward and somehow an agreement was made with municipal officials. The sculpture was acknowledged by the city and restored at Oudekerksplein (translation: Old Church Square) in July 1993 including proper soundproofing material.

This sculpture known as the Borstplaat or the Breastplate in English is clearly an homage to Amsterdam’s many sex workers as it is located within the famous Red Light District, steps away from the church’s front door.

The identity of the artist remains a mystery to the public.

One response to “THE BRONZE BREASTPLATE”